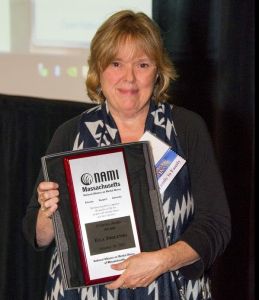 Smolenski, a Florence resident, says she accepted the award in honor of all families who are unsung heroes in the area of mental health. I am proud to “embrace the mission of the National Alliance on Mental Illness because I believe that self-stigma and stigma in general are obstacles to obtaining treatment for very treatable mental health disorders and funding,” said Smolenski.

Identified by her nominators and NAMI Mass as “one of those people who quietly and steadily gets things done,” Smolenski has taught Family-to-Family, a support group for families dealing with mental health issues for three years after participating in the class five years ago.  She has been working with Cooley Dickinson Hospital’s inpatient behavioral health staff to co-facilitate the program and has organized community mental health fairs.

Because of her commitment and passion for those living with a mental health diagnosis and their families, Smolenski was recruited to join Cooley Dickinson’s Patient and Family Advisory Council in 2014. In that role, she brings a perspective about patients with mental illness that would otherwise not be at the table. Through Cooley Dickinson’s relationship with Smolenski, Cooley Dickinson has worked more closely with the western Mass. Chapter of NAMI and CDHC President and CEO Joanne Marqusee was among the first in western Mass to sign the CEOs Against Stigma Pledge.
Learn more about NAMI Mass.
-30-