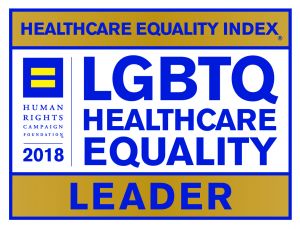 The designation was announced in the 11th edition of the Healthcare Equality Index (HEI), which was released Tuesday, March 27.

“At Cooley Dickinson, we believe in embracing diversity, understanding difference, and striving for health equality for everyone, and especially in the care we provide to our patients and families,” said Cooley Dickinson Health Care President and Chief Executive Officer Joanne Marqusee.

Marqusee noted that we cannot take for granted that because of where we live and work – in a community enriched by a relatively large percentage of LGBTQ individuals and families – that health care providers consistently offer knowledgeable, sensitive and affirming health care, free from discrimination.

“While we know all our staff and providers are committed to competent and affirming care for the LGBTQ population, it is our responsibility to do all that we can to assure that they have the training and tools to deliver on that promise and that our facilities and materials also reflect this commitment to respectful, equitable, and inclusive care to everyone, every time,” she added.

The following are some examples of initiatives Cooley Dickinson has put in place or that are ongoing that demonstrate the organization’s commitment to equitable and inclusive care: 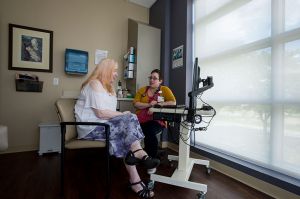 • Adopted a policy piloted at Partners HealthCare that supports employees going through gender transition. Currently working to successfully implement the policy throughout the Cooley Dickinson organization to help ensure a successful workplace transition.

• Providing increased access through clinicians who have a specialty in LGBTQ care.

• In an effort to identify and address the cultural needs of each patient, as well as monitor and analyze health disparities, Cooley Dickinson uses its new Epic electronic medical record system to safely and sensitively collect data on sexual orientation and gender identity. In the process, Cooley Dickinson makes every effort to identify patients by their proper name and preferred pronoun in all our settings.

Added Marqusee, “though we have made notable gains over the past few years, there is still much more work to be done.”

Cooley Dickinson’s focus on improving LGBTQ care is part of its broader efforts related to diversity, inclusion, and health equity.

HRC President Chad Griffin said “with some of our biggest battles ahead of us, it is critical that institutions continue to demonstrate that the march toward full equality is not slowing down. The 626 participants in this year’s HEI continue this march in partnership with the LGBTQ community and we commend them for their leadership.”

HEI Criteria
The 11th edition of the HEI marks the second year that participants are given a numerical score based on their LGBTQ-inclusive policies and practices. HEI participants are given scores in four criteria: foundational elements of LGBTQ patient-centered care, LGBTQ Patient Services and Support, Employee Benefits and Policies and LGBTQ Patient and Community Engagement. Participants that receive the maximum score in each section earn the coveted status of “2018 LGBTQ Healthcare Equality Leader.”

Of the hospitals that did not participate in the HEI but were scored based on research, only 63 percent have patient non-discrimination policies that include both “sexual orientation” and “gender identity,” and only 53 percent were found to have an LGBTQ-inclusive employment non-discrimination policy. The equal visitation policy, at 93 percent, is the only one that comes close to matching the rate of the participating facilities.

For more information or download a copy of the report.

About the HRC
The Human Rights Campaign Foundation is education arm of America’s largest civil rights organization working to achieve equality for lesbian, gay, bisexual, transgender and queer people. HRC envisions a world where LGBTQ people are embraced as full members of society at home, at work and in every community.

About Cooley Dickinson
Cooley Dickinson Hospital, a Massachusetts General Hospital Affiliate, is part of an acute care community health system that has been advancing the health of our region since 1885. Cooley Dickinson serves Hampshire and Southern Franklin County residents in the Five-College region of the Pioneer Valley of Massachusetts. Learn more at www.cooleydickinson.org