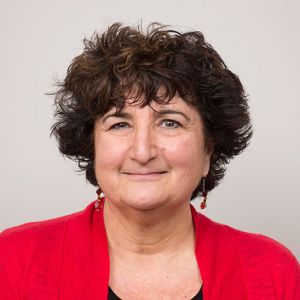 Mansolillo is a speech-language pathologist at Rehabilitation Services’ Atwood Drive office, and is also on the faculty at Elms College, where she teaches undergraduate Communication Disorders students.

“Based on the submission from your nominator,” wrote MSHA President Robert Melchionna, M.S., CCC-SLP, BCS-S, “this award is very well deserved.”

“I’m very surprised to be chosen and thrilled about the award,” says Mansolillo. who has worked for Cooley Dickinson since 2006. Her colleagues and supervisors are elated for her:

“Angela is one in a million – she is the backbone of the Speech department, and she is known throughout the states for her expertise,” says Assistant Director of Rehab Services Colette Fellows. “She consistently is taking on students to share her wealth of knowledge. We are so fortunate to have her in our rehab department and in our organization.”

As this year’s award winner, Mansolillo will also be submitted to the American Speech-Language-Hearing Foundation as a candidate for the 2019 Louis M. DiCarlo Award, which will be presented at the organization’s convention in November.

Mansolillo was nominated by Lisa Sommers, M.A., CCC-SLP, Clinic Director and Clinical Assistant Professor at UMass-Amherst’s Department of Communication Disorders, a part of the School of Public Health & Health Sciences.

Sommers’ nomination highlighted Angela’s participation in their annual Professional Development conference, where she shared her expertise in understanding and treating dysphagia (swallowing disorder). She also praised her repeated guidance of UMass graduate students who completed internships in the Cooley Dickinson Speech Therapy Department.

“It has been such a pleasure and privilege to partner with Angela Mansolillo in the clinical education of our students,” said Sommers. “ASHA could not have a better example of all of the things that a speech-language pathologist should represent.”