Joyce Chunglo remembers the October day in 1970 when she started working as an LPN at Cooley Dickinson Hospital. She had just returned to her hometown of Northampton from the west coast where she had worked for 6 months. It wasn’t for her; New England beckoned.  “I missed home!”

Once back at her parents’ South Street home, Joyce called Cooley Dickinson’s nursing supervisor, Mary Brennan.  Joyce had worked alongside Mary – and many other Cooley Dickinson nurses – a decade earlier when at age 13 Joyce started volunteering as a candy striper until she graduated from St. Michael’s High School and was accepted into an LPN program at Addison Gilbert Hospital in Gloucester, Mass. Brennan was able to help Joyce get a foot in the door at Cooley Dickinson. 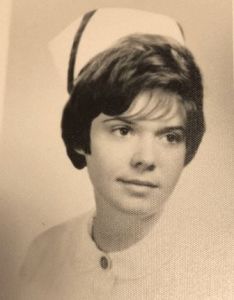 Joyce recalls telling Mary, the west coast just didn’t work out. “So I asked Mary if she had any work for me.” To that question, Mary replied, “just come along. We’ll find something for you.’”

“People here were like family. They took care of you and wanted the best for you,” Joyce says of the nurses she wanted to emulate. Inspired by how she was treated and her love of this community, the LPN who walked on to what was then the West 2 Med Surg unit on Oct. 7, 1970, never left. And, she says, she has no plans of leaving Cooley Dickinson anytime soon.

This year, LPN Joyce Chunglo celebrates 50 years of service to Cooley Dickinson Hospital, its patients, and the community.

Joyce has been a witness to Cooley Dickinson’s history. She was a candy striper in June of 1964 when Senator Ted Kennedy’s plane crashed in an apple orchard in Southampton. She never met the senator who spent weeks at Cooley Dickinson for a variety of injuries before being transferred to New England Baptist Hospital. Yet Joyce remembers the “men in dark suits” walking around, the press conferences with national news outlets in the Dakin Conference Room, and Senator Kennedy’s surgeon, Dr. Corrigan.

Joyce has worked on every nursing unit in the hospital. Back in the day, she says, most of the rooms were two- or three-bed rooms.

“In those days, people stayed in the hospital for weeks, sometimes months,” says Joyce, noting that patients were hospitalized for 7-10 days for gallbladder surgery, which today is an outpatient procedure where patients go home within 4 hours of surgery. Remembering caring for two different patients who had each broken both their legs from serious falls, who were hospitalized for 6 months, Joyce muses “medicine has certainly evolved over the years; it’s so much better for patients now.”

General Surgical Care Nurse Practitioner Casey Fowler has had the pleasure of working with Joyce over Casey’s entire career at Cooley Dickinson, which, she says, is barely half of Joyce’s.

“Throughout every interaction over a quarter century, in each of my roles, Joyce has been pleasant, helpful, a great patient advocate and one of the best representatives of Cooley Dickinson. I appreciate all she has done for staff, patients and families, and I am proud to know her,” says Casey.

From the 70s through the early 2000s, Joyce took care of hundreds of patients. No matter where she worked, Joyce says, “it was important to me to know that my patients were taken care of and comfortable when I left for the day.” 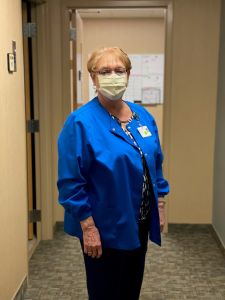 “Joint patients got PT and OT in the Joint Replacement Center gym a few times a day. We had a hairdresser treat the patients to a shampoo before they were discharged. There was time to teach them how to recover from their surgery. Patients got to know each other as they recuperated. It was the perfect setting.”

Anne Ridabock, RN, who worked with Joyce in the Joint Replacement Center, says her colleague never forgot anyone’s birthday, and was always baking something. “Over her career, Joyce strove to make connections with everyone, patients and co-workers alike. Joyce has been a very positive figure to many people over the years,” says Anne.

Joyce experienced the Joint Replacement Center first-hand in 2003 when she had her hip replaced. Today, “the patients’ length of stays (in the Center) are much shorter. This, too, is better for patients,” she says.

From Bedside Nursing to Outpatient Care and Beyond

Four years ago, Joyce joined Cooley Dickinson Orthopedics & Sports Medicine as their triage nurse after meeting Chief of Orthopedic Surgery Dr. Jon Fallon in the Emergency Department one day. Transitioning to the practice has worked well for Joyce, who leads classes for people who are considering joint replacement surgery.

Taking care of patients in the outpatient setting has overtones of bedside nursing. “I am still providing care to patients. Now patients say to me, ‘so this is where you ended up. You took care of me 16 years ago.’ They remember me. And we get to reminisce.”

Dr. Fallon says he is privileged to call Joyce a friend and a colleague. “With 50+ years of nursing at Cooley Dickinson, the amount of caring, knowledge, and love that Joyce has shared with us is immeasurable.”

Joyce also enjoys her schedule at Orthopedics & Sports Medicine, which allows her to still take care of patients and juggle time with family – her daughter Sara works at Cooley Dickinson as a patient care associate – and her son, Daniel, who works in the field of crop science and grows 65 acres of corn. Her husband Dan is retired from UMass. Something of a local celebrity in the town of Hadley, Joyce served on the selectboard for 18 years, the School Committee for 15 years, and at one point was a cheerleading coach. Her one take-away from civic life: “If you all work together, everyone benefits.”

Asked about retirement, Joyce quips, “I guess I should see a financial advisor at some point.” But for now, she is taking each day as it comes. “It’s just a good feeling to take care of people, to have those connections with people and my community. It’s what I have done my whole life. Why change things now?”