Cooley Dickinson is the only hospital in western Mass. to earn a top score of 100 in a national benchmarking survey and earn the “LGBTQ+ Healthcare Equality Leader” designation 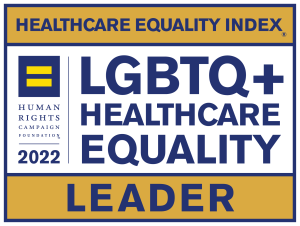 Today, Cooley Dickinson Hospital received an evaluation of 100 and the designation of “LGBTQ+ Healthcare Equality Leader” in the Human Rights Campaign Foundation’s 15th anniversary edition of the Healthcare Equality Index (HEI), the nation’s foremost benchmarking survey of healthcare facilities on policies and practices dedicated to the equitable treatment and inclusion of their LGBTQ+ patients, visitors and employees.

Cooley Dickinson is the only hospital in western Mass. – and one of 14 in the Commonwealth – to earn the LGBTQ+ Healthcare Equality Leader designation.

According to the Human Rights Campaign Foundation, 906 healthcare facilities actively participated in the 2022 HEI survey and 496 of those earned an “LGBTQ+ Healthcare Equality Leader” designation.

“We are here for all patients no matter who they love, what they believe or where they come from,” says Cooley Dickinson Health Care President and Chief Executive Officer Lynnette M. Watkins, MD, MBA. “The COVID-19 pandemic has shed light on the health inequalities that have existed for decades.

“I am so proud of our teams at Cooley Dickinson who put equitable, inclusive and affirming care at the center of the services we provide here. They are to be commended for doing this critical work every day, and earning this designation from The Human Rights Campaign validates their efforts.”

The Healthcare Equality Index 2022 benchmarking tool asked participants a series of questions about LGBTQ-inclusive policies and practices. Those questions are divided into four criteria, including
• Foundational Policies and Training in LGBTQ+ Patient-Centered Care;
• LGBTQ+ Patient Services and Support;
• Employee Benefits and Policies; and,
• Patient and Community Engagement.

How Cooley Dickinson is Paving the Way Toward LBGTQ+ Equality

• A Positive Place of Cooley Dickinson, which has been providing comprehensive HIV services for over three decades to gay, bisexual men and other same-gender-loving men (among other clients), has more recently been partnering with health-care providers and community-based human services programs in providing transgender health navigation for individuals at risk of HIV/HCV/STI.

Cooley Dickinson has earned an overall score of 100 on the past five Healthcare Equality Index benchmark surveys.

About the Healthcare Equality Index

In the 2022 report, an impressive 496 facilities earned HRC’s “LGBTQ+ Healthcare Equality Leader” designation, receiving the maximum score in each section and earning an overall score of 100.

“Every person deserves to have access to quality healthcare, be respected and heard by their doctor, and feel safe in the facility where they are receiving care,” says Tari Hanneman, director of Health & Aging at the Human Rights Campaign.

“But LGBTQ+ people are often subject to discrimination in all spaces, including healthcare facilities, which leads to members of the community avoiding care and anticipating our voices will not be respected in an incredibly vulnerable environment.

“The Healthcare Equality Index, at its core, strives to ensure LGBTQ+ people are protected and affirmed by their healthcare providers and feel safe seeking services,” Hanneman adds. “Our HEI active participants are truly pioneering the healthcare industry by implementing robust, comprehensive LGBTQ+ inclusive policies that hopefully, because of their work, will become standard practice.”

Another 251 facilities earned the “Top Performer” designation with scores between 80 and 95 points and at least partial credit in each section. With 82% of participating facilities scoring 80 points or more, health care facilities are demonstrating concretely that they are going beyond the basics when it comes to adopting policies and practices in LGBTQ+ care.

In addition to active survey participants, the HRC Foundation proactively researched the key policies for LGBTQ+ inclusion at over 1,300 non-participating hospitals. Unfortunately, these non-participating hospitals were much less likely to have LGBTQ+ non-discrimination policies in place, which is a stark contrast to the near-perfect adoption by active participants. Among the hospitals reviewed in which the HRC Foundation was able to find or obtain enumerated patient non-discrimination policies, only 70% have policies that include both sexual orientation and gender identity compared to 99% of HEI participants.

About Cooley Dickinson
Cooley Dickinson Hospital, part of Mass General Brigham, has been advancing the health of our region since 1885. Cooley Dickinson Health Care serves Hampshire and southern Franklin county residents in the Five-College region of the Pioneer Valley of Massachusetts. Learn more at www.cooleydickinson.org

About the Human Rights Campaign Foundation
The Human Rights Campaign Foundation is the educational arm of the Human Rights Campaign (HRC), America’s largest civil rights organization working to achieve equality for lesbian, gay, bisexual, transgender and queer (LGBTQ+) people. Through its programs, the HRC Foundation seeks to make transformational change in the everyday lives of LGBTQ+ people, shedding light on inequity and deepening the public’s understanding of LGBTQ+ issues, with a clear focus on advancing transgender and racial justice. Its work has transformed the landscape for more than 15 million workers, 11 million students, 1 million clients in the adoption and foster care system and so much more. The HRC Foundation provides direct consultation and technical assistance to institutions and communities, driving the advancement of inclusive policies and practices; it builds the capacity of future leaders and allies through fellowship and training programs; and, with the firm belief that we are stronger working together, it forges partnerships with advocates in the U.S. and around the globe to increase our impact and shape the future of our work.