Since 2013, Cooley Dickinson Health Care has been affiliated with Massachusetts General Hospital and part of the Partners HealthCare Network. Every year, we have expanded access to Mass General services at Cooley Dickinson by including access to more specialties, consultations, and programs. In addition, our community lectures and clinical Grand Rounds continue to provide educational exchange for both health care providers and the general public, growing our knowledge base and sowing more seeds of collaboration in areas that draw upon unparalleled medical expertise and bring the most modern treatment options within reach of our patients and their families.

Do you have a story about how our affiliation has impacted you or your family? Share your story.

Below are a few highlights of our ongoing collaborations with Mass General:

The Mass General Cancer Center at Cooley Dickinson Hospital exemplifies the future of cancer care in our community. It takes a coordinated relationship between community hospitals and academic medical centers to create a cancer center where the right approach to care and treatment is delivered to the right patient, at the right time, in the right place. This is where cancer care is headed and why the Mass General Cancer Center is important to the people of western Massachusetts. 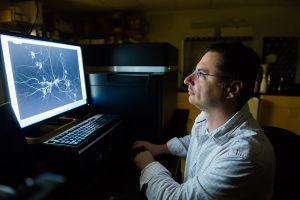 Since we affiliated with Massachusetts General Hospital in 2013, more than 1,500 patients have benefited from our TeleHealth programs – Routine and Urgent TeleNeurology, Emergency TeleNeurology and TeleStroke programs, where emergency physicians consult in real time with Neurologists at Mass General. These consults can be crucial to Emergency Department decision-making, and can help identify how to best apply available resources including clot-busting drugs that can save lives.

The first kidney evaluation clinic opened in February 2018 and as of June, specialists have evaluated 12 patients for kidney transplant. Out of the 12 patients we have evaluated, nine have been listed with UNOS (the United Network for Organ Sharing) and two are still pending. 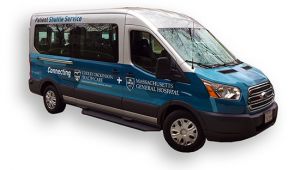 As part of our ongoing effort to make access to Mass General treatments and providers as seamless as possible, Cooley Dickinson began offering daily free shuttle service to Mass General for existing patients, family/support caregivers and employees in April of 2018, including available wheelchair-accessible trips. In the first three months, the shuttle has served more than 230 riders, and has proven to be an extremely popular pilot program that patients have said makes trips to Mass General much easier for them.

For pregnant women with complex conditions, Cooley Dickinson offers an added level of reassurance. Women who have obstetrical risk factors due to age, family history, or previous medical concerns have access to a Mass General maternal fetal medicine specialist at Cooley Dickinson Hospital in Northampton. Since February 2015, clinicians have provided 160 consultations and 640 level two ultrasounds.

Cooley Dickinson Hospital hosts several community lectures a year by presenters from Mass General Hospital, usually followed the next day by “Grand Rounds” – lectures to providers and other medical professionals in a clinical setting that can count toward continuing medical education credits.

Community Lectures: 33 community lectures have been held since our initial affiliation, by Cooley Dickinson and Mass General providers from a variety of  specialties. The first lecture, held in June of 2012, was titled Lung Cancer: What You Need to Know; the most recent, in April 2018, was a lecture on osteoporosis and bone density called Building Better Bones. Other topics of considerable public interest have included breast health, autism integration into mainstream health care, tick-borne diseases, and many specialized talks on various cardiovascular conditions. The public can read about and register for upcoming community lectures through our Classes and Events page.

Grand Rounds: Grand Rounds are given as professional seminars from medical providers to medical providers, and are eligible for continuing medical education credits. In the last year, topics for providers have included Parkinson’s Disease, Anemia, Headache Management (Neurology), Kidney Transplantation and Amyotrophic Lateral Sclerosis (ALS). Cooley Dickinson providers are fortunate to have the opportunity to attend lectures by some of the top researchers in their fields from Mass General Hospital, and patients ultimately benefit from this knowledge as well.

Do you have a story about how our affiliation has impacted you or your family? Share your story.