Summer in the Galleries

The following artists will be exhibiting in the galleries at Cooley Dickinson Hospital and at 22 Atwood Drive: 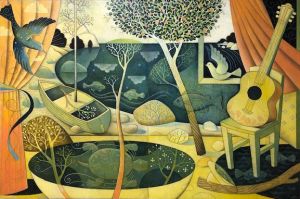 
Paul has had a long and successful career as an illustrator and a painter. Working first for the University of Chicago’s Egyptian Department, he traveled to Luxor, Egypt, to beautifully document the scenes and inscriptions at the temple’s site. He went on illustrating for the New York Times, many magazines, educational books, and in advertising.

But in 2015, Paul moved from illustration to painting. His intensely patterned magical scenes exhibit both a deep gift for visual storytelling, and a generous spirit that radiates from his work.

Having the chance to exhibit his work at the hospital is truly a “healing gift” from him to all of us. 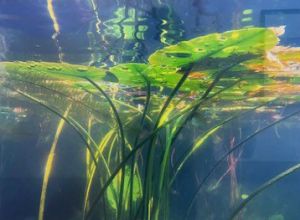 Having received her MFA in English from the University of Massachusetts, Lisa has been a widely published poet for many years. But during the strange pandemic summer of 2020, she discovered her powerful visual voice. She had been snorkeling for years, but it was when she got a waterproof case for her smartphone that the amazing colors, shapes, and layers of light beneath the water’s surface became her focus of expression.

Exploring heavily in her local Lake Holland, her sense of wonder and sensitivity to this natural world resonate beautifully as she shares her experiences with the viewer. We are so grateful to be launching this creative pivot with her, and look forward to seeing her new adventures. 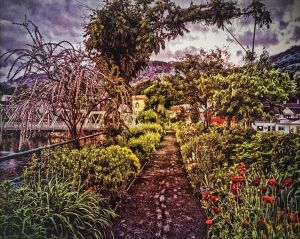 Martin has been documenting the beautiful town of Shelburne Falls for many years. But he is truly a renaissance man. He is an accomplished musician, having played Handel’s oboe concerto with the Boston Symphony after winning a competition. At the University of Pennsylvania, he was a leader in developing and popularizing the Moog synthesizer and, while at Harvard where he received an MA in composition, he performed with Yo Yo Ma, and John Cage among others.

He later became an established chef, first in Cambridge, and then as a chef and as the owner of his own restaurants (including in Shelburne Falls!). He taught baking at Holyoke Community College for 20 years.

Marty has never taken a photography lesson and does all of his work with either a Note 3 or Note 8 Android phone. We are thrilled to be able to share his wonderful work here at Cooley Dickinson.