Help the Next Generation of Cooley Babies

At our Childbirth Center, Cooley Babies keep arriving and thriving with support from our caring team of expert midwives, nurses, providers and others. We’re excited to get back to activities that celebrate the Cooley Babies in our lives, including the photo submissions that light up your social media feed with pictures of Cooley Babies of all ages.

Welcome to the Family!

If you’re a Cooley Baby or if you love someone who is, you’re in the right place. This is the space for everyone born at Cooley Dickinson Hospital and their families. Share your Cooley Baby pride. See baby photos, listen to our Cooley Baby tunes on Spotify, and follow us on Instagram to learn more about our upcoming Virtual Photo Booth events.

Check out our Cooley Baby Playlists on Spotify

*NEW* SPRING IN YOUR STEP *NEW*
The days are getting longer and the flowers are blooming.
It’s Spring in New England!
Enjoy these tunes inspired by sunshine, BBQs, and quality time outdoors with family.

Nap Time
Need to get your Cooley Baby off to sleep? Check out the lullabies and gentle tunes on this special Spotify playlist.

Northampton, MA Artists
Cooley Babies aren’t the only great thing to come from our area. Meet a few of the many accomplished musicians with a NoHo connection in this Spotify playlist.

Birthing in the Time of Covid: Childbirth Center Stories from 2020

Southampton parents Abbie and Patrick “PJ” Cadigan may have had one of the more unexpected roller-coaster rides this past year when their third child, Declan, was born on April 21st. COVID-19 was almost a complete mystery at the time, so the couple found themselves nerve-wracked when PJ came down with something a week before their due date, on April 20th, and dutifully quarantined out of fear of the unknown. Though his test ultimately came back negative, Declan (who, like all of Abbie’s deliveries, arrived faster than express mail), was born while his dad was still awaiting results and had to FaceTime in to be with the family in the moment.

Though Declan’s whole birth process was exceptionally quick, there were still some crucial hours where Abbie needed somebody to “take the wheel.” Enter: Grandma, Abbie’s mother Ann Donah, who jumped into her car and zipped over to Abbie’s to bring her to Cooley Dickinson, and in the nick of time, too; Declan James Cadigan was born hardly 10 minutes after they’d wobbled anxiously through the hospital’s main entrance.

“The nurses, doctors, aides and everyone in the Childbirth Center were remarkable! They were kind as they knew we were worried and confused about the pandemic,” says the Westfield Kindergarten teacher. “Everyone took every precaution that they could to make us feel safe – everyone had masks. It was right at the beginning of the pandemic and no one knew how contagious it was – we were disappointed [that PJ could not be with them] but we understood.”

Abbie and her mom stayed for about 30 hours at the hospital, and in at least one way it was good that PJ had to stay home.

“April 22nd is our other son, Aiden’s birthday, so I got to be with him while he turned five,” says dad, a guidance counselor who [in normal times] works in Ludlow. “And our daughter, Delaney, just turned three, so I had my hands full.”

Through it all, the couple kept the course steady, and were able to tag-team their way to the goal line with the help of Grandma and the providers and staff at the Cooley Childbirth Center.

“Cooley is my community hospital and I had all my children there,” says Abbie. “It was a place that made me feel safe and well cared for during a very confusing and hectic time.”

To read more stories about parents whose babies were delivered during the covid-19 pandemic, click HERE. 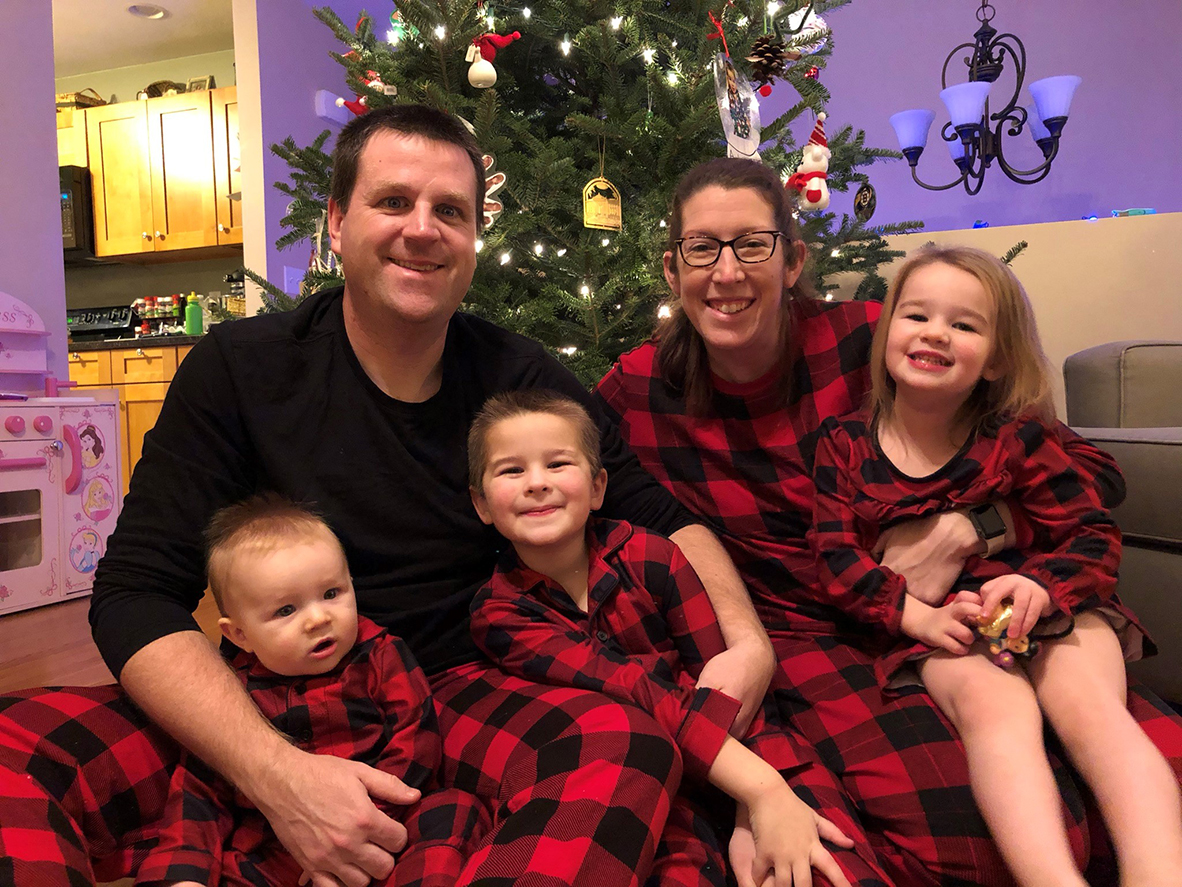