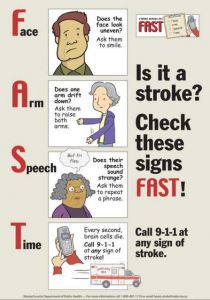 In 2005, Cooley Dickinson Hospital established a multi-disciplinary team to ensure that all stroke patients receive stroke care that exceeds state and national expectations, and that all potential stroke patients arriving at our ED receive rapid assessment, diagnostic testing and treatment. A patient’s safety and health are always our primary focus.

Cooley Dickinson Hospital has been licensed as a Primary Stroke Center that offers fast, award-winning care to patients, by the Massachusetts Department of Public Health. This benefits our community by allowing our patients the best chance for receiving early treatment; the sooner the treatment, the better the outcome. Using this as our prime directive, we strive to make full use of all of the following tools at our disposal:

In 2016, Cooley Dickinson’s Stroke program received the Get with the Guidelines Gold Plus Award/Target Stroke Honor Roll for quality stroke care in 2015.

Cooley Dickinson ED Stroke Protocol: Learn how to recognize a stroke; identify stroke risk factors & tools for prevention; and get a preview of what happens if you are transported to Cooley Dickinson Hospital’s Emergency Department with a suspected stroke.

In the wake of a stroke, patients can often face a hard, uphill road to recovering lost speech, coordination and other aspects of life once taken for granted. Though the path is almost never easy, if you are a patient who is recovering from a stroke, you can make real progress in regaining lost ability, and Cooley Dickinson is here to help you take the first step.

If you need help rebuilding your abilities after a stroke, Cooley Dickinson offers speech, physical and occupational therapy through our Rehabilitation Department, where trained specialists work with you and your family members to determine your best options upon discharge. We also preventative education to patients and family members and community education programs to promote awareness of signs and symptoms of stroke and the use of emergency medical services.

Stroke Survivor: One Gain at a Time

To hear Heidi Allen tell her story, she was cooking dinner one minute and walking into Cooley Dickinson Hospital’s Emergency Department the next.

John Allen, her husband of 45 years, gently reminds Heidi that she didn’t “walk” into the Emergency Department; she was taken to the hospital by ambulance. Heidi pauses and agrees, remembering the ambulance personnel. “They were funny,” she said with a laugh.

It’s been two years since a blood clot cut off the blood supply to the right side of Heidi’s brain, causing impairment on the left side of her body. While it’s been a lengthy recovery from what her doctors call a moderate-to-severe stroke, Heidi is not too concerned with the details of that March 2010 evening. Instead, Heidi focuses on what she calls the “little breakthroughs” that have come from months of physical, occupational, and speech-language rehabilitation.

Moving On From the Stroke
A stroke is the rapid loss of brain function, caused by a disturbance in the supply of blood to the brain. Strokes can occur on either side (hemisphere) of the brain. The specific abilities that will be lost or affected by a stroke depend on the extent of brain damage and, most importantly, where in the brain the stroke occurred, according to the National Stroke Association.

“In Heidi’s case, the stroke happened in her right hemisphere, thus her left side was impaired physically,” said Laurie Korza, a speech-language pathologist who treated Heidi and coordinated her care with Cooley Dickinson’s rehab team. “In addition to physical impairments, many of her thinking/cognitive and perceptual abilities were affected.”

Some of Heidi’s physical impairments resulted from a combination of cognitive and physical weaknesses. “Imagine not knowing how to put your arm into the sleeve of your jacket. You know your arm goes in the sleeve, but you don’t know how to make it happen,” said Korza. “Or you are sitting in a chair. You need to get up, but you don’t know how. We typically don’t think about getting up from a seated position. For Heidi, these are tasks she had to relearn, practice, and continues to refine.” In addition, Korza encouraged Heidi to keep a journal, recording the days of the week and keeping lists. “This organizational activity helps Heidi remember where she is in time.”

Every Gain is a Gain
While John said his wife’s progress has been slow and steady, he emphasizes the “steady.” Heidi, too, remembers the advice she got from a fellow stroke survivor, who said that “every gain is a gain,” no matter how big or small.

John attributed these improvements to the collective teamwork of Heidi’s therapists, “looking at the whole person and overseeing Heidi’s care” as one collaborative unit.

He also appreciated that the therapists encouraged other family members, including the Allens’ three grown children, to participate in Heidi’s recovery. “So Heidi doesn’t get confused, we all work with her the same way. Repetition increases the likelihood that the neurons will work again.”

Heidi is “immensely grateful” to the therapists who have helped her in so many ways. “It’s quite a team,” remarked John. “We feel these folks and CDH deserve a real pat on the back. Even the volunteers and support staff we met in the halls helped make the recovery process just a little bit easier.” 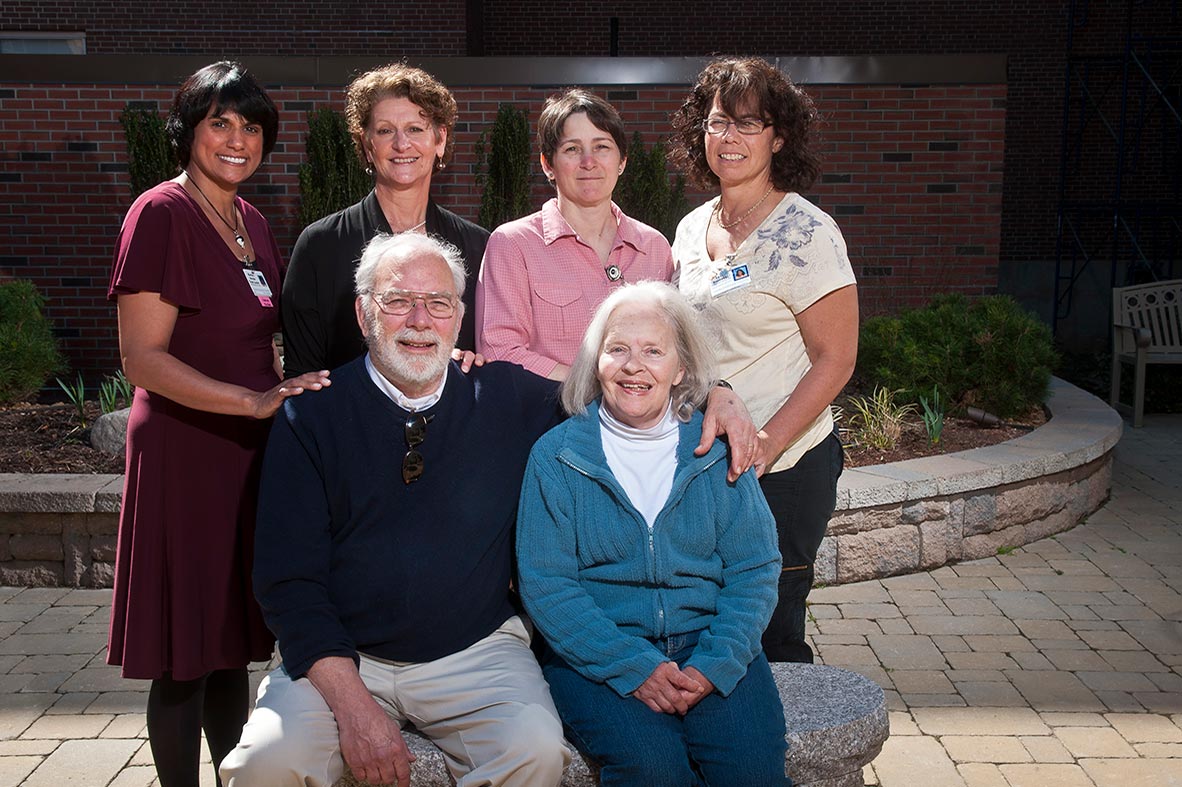