Before you enter the Joint Replacement Center, you’ll be encouraged to designate a family member or friend as your personal coach, to help you through the recovery here and at home. This is in addition to the support you’ll receive from the staff and the other patients who are also recovering from joint replacement surgery. Friends and family members can play a key role in motivating you to participate in your recovery—it always helps to have someone rooting for you when you’re trying to get back on your feet.

At the Cooley Dickinson Hospital Joint Replacement Center, we place equal emphasis on wellness and mobility. Our patients receive between two and four rehabilitation therapy sessions daily and are usually walking, with a walker, less than 24 hours after surgery. We use both group and individual therapy sessions as opportunities to build strength and mobility immediately following surgery. Studies show progress is enhanced by the shared experience and encouragement of group therapy. Plus, it’s more fun. In the private therapy sessions, our therapists can address individual needs. You’ll be encouraged to know that most Joint Center patients can climb a flight of stairs before they leave the Center.

Having turned 60 in 2015, Louise Motyka naturally has given some thought to plans for retirement. One thing she won’t have to fit into those leisure years is knee replacement surgery; that item has been checked off the list.

For 10 years, Motyka had lived with gradually debilitating arthritis pain in both of her knees, especially the left. Like many who are younger than the typical arthritis sufferer, she initially wanted to put off joint replacement for as long as she could. “I felt that I was too young for a replacement, as I was told when I was in my late 40s or early 50s that the replacement would only last about 10 years,” she recalls. “I thought I could hold out until I retired.”

Happily employed as a billing administrator at Cooley Dickinson Medical Group Orthopedics & Sports Medicine in West Hatfield, Motyka quickly discovered a key benefit of her job: the opportunity to get the facts. She learned that the average longevity of today’s artificial joints far exceeds the 10 years of yesterday – 90% of knee replacements are expected to last 20 years or more. Tired of the constant pain and limitations on life, Motyka decided the time was right.

She underwent knee replacement surgery with orthopedic surgeon Jonathan Fallon, on December 22, 2014. “I tell all the patients [at the practice] that if you can make it through the first three weeks of recovery, you’re golden,” she says, adding that her own experience supported that advice. “After working hard at physical therapy, it got easier and easier.”

Today, Motyka enjoys the normal lifestyle she’s long deserved and missed. She may never need a second left-knee replacement, she reports, and recently has reconsidered plans to eventually replace the right knee. “Dr. Fallon [feels] that I was overcompensating for the left knee being painful, causing undue stress on the right knee,” she explains.

Although retirement is still a decade away, Motyka says, she looks forward to living those years “pain free, surgery free, traveling to and walking through many national parks.” In the meantime, she relishes the pain-free present. “The surgery has changed my life for the better,” she says. “It was well worth it.” 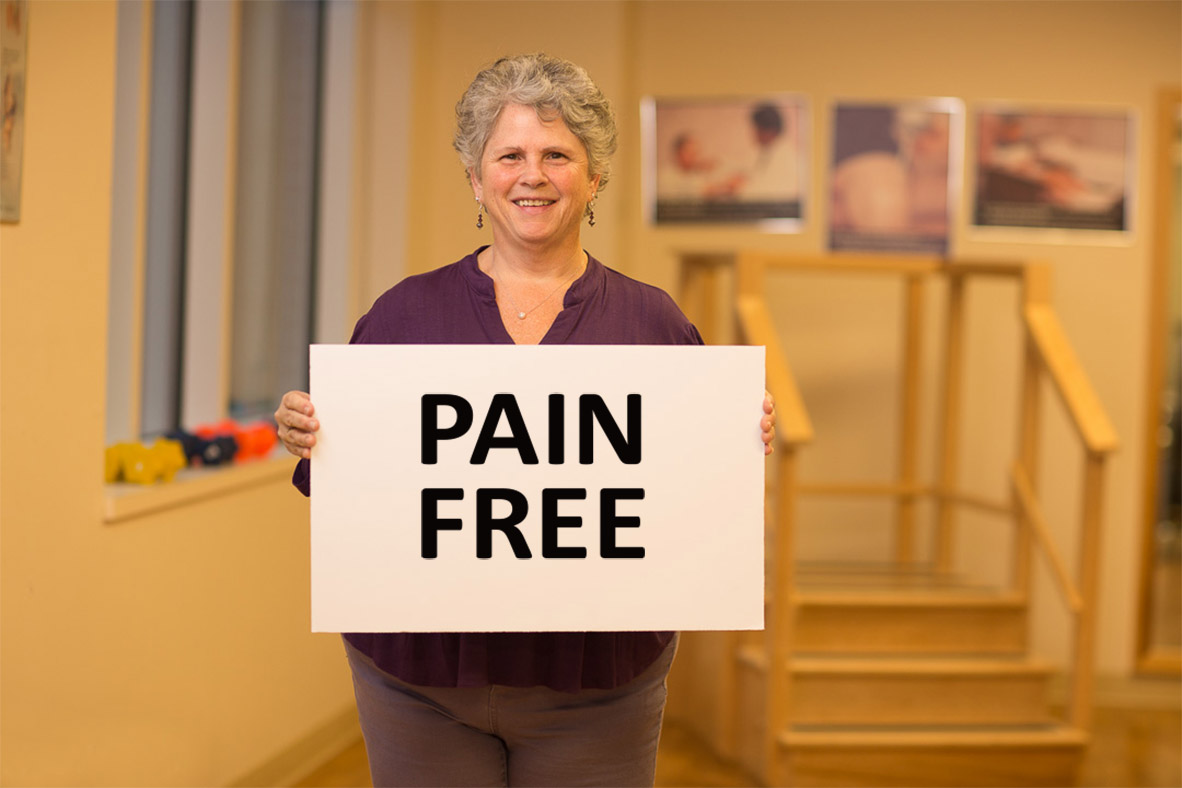